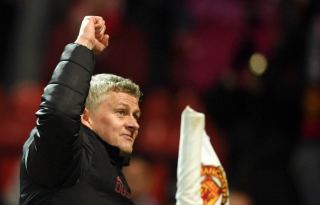 The day we’ve all been waiting for is here. Ole Gunnar Solskjaer has been named the permanent manager of Manchester United after a successful stint in charge as caretaker boss.

Ole’s at the wheel! We can confirm that Ole Gunnar Solskjaer has been appointed as #MUFC manager.

We can only imagine how excited Solksjaer is right now and landing his dream job, but he has proven to be more than just an iconic figure at the club over the past three months.

NEXT: Serie A star sheds light on future amid reported interest from Man Utd and Atletico Madrid

Now that we and the players know who will be manager next season, the big plans can start. No more excuses for David de Gea not agreeing to a deal that would make him the highest paid goalkeeper in the world because of uncertainty over the managerial situation at Old Trafford.

It’s great news to start your day, knowing Solskjaer has overcome his status as an underdog in the United hot seat. When he got the caretaker role most felt Tottenham Hotspur boss Mauricio Pochettino would be José Mourinho’s eventual successor at the end of the season, but the Norweigan’s hard work put him in a position which left the club with no other choice.

Sir Alex Ferguson, who we have no doubt has had involvement in all of this, will be buzzing to see one of his former players grow as a manager at United.

Let’s hope for some great times under Ole. He’s at the wheel, baby!