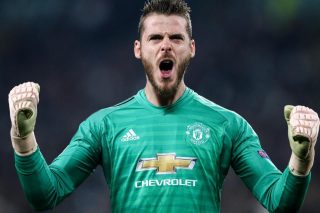 David de Gea’s future at Manchester United remains uncertain and it’s becoming a bit of an issue. Fans understandably want the entire situation dealt with, to have the best goalkeeper in the world commit to their club, but both parties are taking time to come to an agreement.

The Spaniard’s current deal was set to expire at the end of the season, but the club triggered a one-year extension clause in November. That means he could still leave in 2020 on a free transfer.

Reports over the past few months suggest De Gea is happy in Manchester and wants to stay at Old Trafford, where he has an incredible bond with supporters after winning United’s player of the year award in four of the last five seasons.

NEXT: Arsenal and Barcelona target Brazilian whizzkid who had trials at Man Utd

However, Champions League qualification for next season remains one big obstacle in negotiations over a new deal for De Gea. That has today been reported by Dan O’Toole in the Manchester Evening News.

United sit in 5thplace in the Premier League two points adrift of Arsenal in fourth place. While we’ve no chance of winning the title, securing a Champions League spot is the next best thing and it won’t be easy with eight games remaining.

Of course, there is the opportunity to secure automatic qualification for next season’s Champions League by winning this year’s tournament outright. The Reds face Barcelona in the quarter-finals after knocking Paris Saint-Germain out in the previous round.

Losing De Gea would come as a huge blow to United, who let’s face it, didn’t have the best record signing goalkeepers during the Sir Alex Ferguson era.