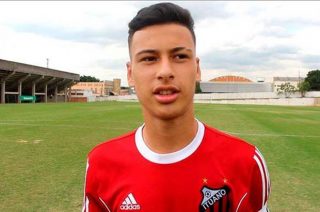 A former Manchester United trialist has attracted the interest of Arsenal, who have reportedly launched a £5 million bid for the 17-year-old Brazilian.

According to Fox Sports Brasil (via Mirror), Arsenal have made an offer to sign Gabriel Martinelli of Ituano, who play in the Paulista A1 Championship, which is the top-flight league in the Brazilian state of Sao Paulo.

The valuation stated above seems to be that of Arsenal, not Ituano or the player’s representatives.

NEXT: Preview: Man Utd have too much quality for Watford, even with injury hit squad

His trial at United came two years ago, but now there’s more interest from the Premier League.

Martinelli has scored six goals in 14 appearances this season, and the report even states that Barcelona are also tracking the youngster as well as Championship sides Leeds and Middlesbrough.

Martinelli’s agent Marcos Casseb spoke about the growing interest in his client and admitted a move to Europe was on the cards in an interview with Globo Esporte, cited by the Mirror.

“To be honest we expected this to happen.

“His evolution since last year is very fast, he is above average.

“The initial planning is for him to go straight to Europe.”

Unai Emery can only hope that Arsenal allows him to build a squad good enough to mount more of a challenge in the league next season, so it will be interesting to see who they go for in the summer. A player with a £5m valuation would suit the ‘big spenders’!