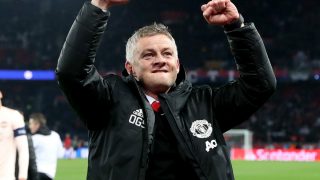 We are buzzing after Manchester United appointed Ole Gunnar Solskjaer as permanent manager.

Solskjaer became caretaker boss in December replacing José Mourinho, but nobody saw him as a potential candidate for the job beyond this season.

From getting United back in with a chance of finishing in the top four and reaching the Champions League quarter-finals, Solskjaer left the club with no other choice and we’ve come to expect such appointment.

Credit to the Daily Mail who this week ran a report on what was Solskjaer’s imminent appointment.

See how United fans and ex-pros reacted to the news on social media below.

I’m delighted for Ole . I didn’t think this would happen when he was appointed . However the results and spirit in the club have been incredible since he arrived and he deserves it. He now needs support in the transfer market in terms of finance and the right resource! ❤️👹

🎶 Tell me how good does it feel… 🎶 pic.twitter.com/wYEpDhK0v4

Yessss Ole is officially at The Wheel… Signed, Sealed, Delivered! Manager of @ManUtd! 🙌🏽 I hope my Thank You is in post Ole 🤣📝❤️ #MUFC #Ole pic.twitter.com/lUUel4f6zw