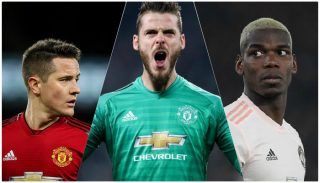 Reading the gossip column first thing every morning is a dangerous daily course of habit in my life. Even more so during an international break which, without fail, only appeals to me once in the knowledge that all the players have come back unscathed.

This week’s gossip column has been bleak reading for Manchester United fans, with the three Spanish amigos, and Paul Pogba featuring heavily for all the wrong, concerning reasons.

Not to mention the fact that Ole Gunnar Solskjaer has still not been confirmed as Jose Mourinho’s full-time successor and, once again, Ed Woodward has not done himself any favours. One would have thought the international break would represent the ideal time to crack on with making inroads into contract agreements from both the managing and playing sides.

Instead, the sagas roll on with an equal amount of uncertainty as to when our players jetted off with their countries and with only a matter of weeks remaining for resolutions in a few cases. Others will rumble on well into the summer and beyond, but there remains a lack of decisiveness at boardroom level.

Let me remind you that Ed Woodward, in his infinite wisdom, beamed with positivity in filing United’s annual figures that you could rest assured he would have contracts to ‘key’ players sorted by the end of May.

Let’s assume by ‘key’ he is referring to the likes of David De Gea, Juan Mata, Ander Herrera, Paul Pogba and Marcus Rashford, as, of those with expiring contracts, Antonio Valencia is leaving on a free and Matteo Darmian is completely out of the picture.

It is well documented that De Gea has been offered the largest pay packet of any a modern day keeper. My gut feeling on this one is De Gea is being poorly advised: There is always conjecture on Alexis Sanchez’s exact weekly wage but the consensus is upwards of £350,000 per week. We all know that deal was frankly ridiculous, but so too does De Gea’s agent Jorge Mendes. He is angling for a deal which reflects De Gea’s status as United’s best player over the last five years.

In an ideal world, that would be the case. If it’s as simple as paying up Sanchez’s contract and using those freed up wages on De Gea, that is the route that needs to be explored and fast… Now Zinedine Zidane is back in charge at the Bernabeu, rumours have resurfaced that, despite owning Thibaut Courtois and Keylor Navas, De Gea is wanted in his hometown once more.

If ever United needed a wake-up call, this is it. They have bought themselves a modicum of wriggle room by triggering a year long extension in De Gea’s existing deal but this, if not sorted quickly, could turn into another drawn out saga. United have enough transfer activity to finalise without a new first choice keeper should the worst happen.

Speaking of a saga, ahh Paul Pogba. The once so-called ‘virus’ is well on his way on the road to redemption- scoring goals, playing in a liberated, attacking position and even donning the armband which he was so famously forbidden from wearing.

On re-signing in 2016, Pogba could be quoted as saying he ‘has all the tools at this club to be the player I want to be’.

So you will not have been surprised to see his flirtations with Real Madrid now Zidane is at the helm again. Some will lambast my criticism in that why shouldn’t a player have dreams and aspirations but to undo his good work in praising the current climate under Solskjaer by calling Real Madrid a ‘dream’ club? That shouldn’t be stomached by any United supporter.

Pogba has been, by and large, exceptional since Ole took to the wheel, so much so that completing his turnaround as the next permanent captain cannot categorically be ruled out. That is why it beggars belief that he is fantasising about turning it on for another club. United have him tied til 2021, with a rumoured habitual year long extension in place too but the scenario doesn’t make for comfortable viewing. I would expect total commitment from any player and for them not to be sidetracked with the mere mention of their name in the papers.

By the same token, Ander Herrera has noticed the attention he is getting from the writers by describing talk of his future as ‘logical’, as seen on the Daily Mail. Herrera will not get as equal a rebuke as Pogba, but essentially he is committing the same offence in failing to bat off suggestions of an exit. It is total nonsense from United’s part that they have allowed his contract to grow dust, considering how influential he has been in United’s resurgence under Solskjaer.

The refusal to commit is surely a tactic to get United to smell the coffee and put forward a suitable package. You can understand Herrera wants key player status, given his revival from bit-part player under Mourinho. Especially when he earns nearly half as less as Marcos Rojo, who is on a reported £150,000 per week to occasionally amble away from the treatment table.

Like Pogba, Herrera is earmarked as captain material, which makes talk of a move to the one team French league surprising and a move to domestic and positional rivals Arsenal a complete travesty. Herrera is one of the most popular and influential players in the dressing room, his bond with De Gea and Mata is uplifting and handy for the less confident Spanish speaking players in the squad. Dare I say that Herrera and Mata will be pivotal in getting De Gea to finally put pen to paper? I don’t think that is too far fetched. It is open to debate whether, with a heavy heart, Juan Mata fits into the desired style United are trying to implement, but it will be a cruel blow should any of the Spaniards fail to find an agreement to keep them at United next season and beyond.

Marcus Rashford has now established himself as United’s main man and has also struggled to come to an agreement since the new deal he penned as Mourinho took over. Like Pogba’s, Rashford and United have room for manoeuvre on his but he deserves a new deal to reflect his new found status.

Talk of a new five-year deal is appearing but, once again, the lack of progress is cause for concern.

I suppose when the manager hasn’t even been formally announced yet, we shouldn’t be surprised at the lack of announcements either on the playing side or the director of football front.

Perhaps once Ole has been announced, the rest will fall into place.

One thing’s for sure, this week hasn’t made for happy reading just yet.

Bring on Saturday and the return of club football.