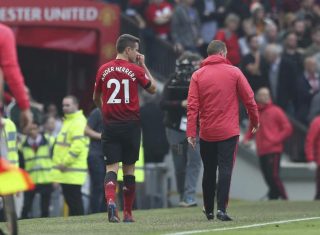 According to ESPN, Manchester United and Ander Herrera face a race against time to find an agreement to keep the midfielder at Old Trafford beyond this season.

Herrera has performed consistently since Ole Gunnar Solskjaer and it doesn’t look like any party involved wants to go their separate ways, but why are we still waiting for an announcement? There must be stumbling blocks.

The report claims that Paris Saint-Germain, Arsenal, Juventus, Inter Milan and Barcelona all want to sign Herrera on a Bosman if United and the player can’t come to an agreement.

In fact, this stand-off could risk Herrera becoming a free agent on June 30.

The Spain international is replaceable but it would be cheaper to keep him than making our objectives for the summer market more of a challenge. It’s tough enough as it is.

He has become a key part of Solskjaer’s trio in midfield with the former Athletic Bilbao star partnering Nemanja Matic and Paul Pogba. All three have done well under the new manager but they will still all need to be better next season.

Hopefully United can find an agreement with Herrera’s entourage and all of this speculation is finally put to bed.

Can you imagine Herrera signing for Arsenal on a Bosman? No. Me neither.