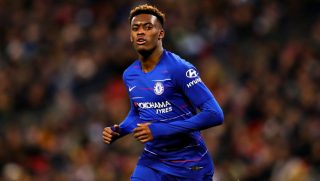 According to The Times, Manchester United and Bayern Munich are preparing summer bids to sign Chelsea starlet Callum Hudson-Odoi.

Chelsea are running a huge risk with this stance as this is the last point at which Chelsea can make a significant amount of money on the player because his contract will only have 12 months remaining this summer. He clearly doesn’t want to be at the club after having a transfer request rejected in January.

Moreover, Gareth Southgate is a fan after handing Hudson-Odoi his first full England debut against Montenegro this week. The 18-year-old performed very well and even provided an assist for one of Ross Barkley’s goals.

But he’s not getting regular first-team football under Chelsea boss Maurizio Sarri and plays in a role where United are desperate to improve, so why are the Blues so adamant about keeping him? They’ve already limited his starts in the Europa League and domestic cups since the Bayern saga began.

Of course, Chelsea fans want Hudson-Odoi to stay at Stamford Bridge but making him do so against his will is hardly fair at this point? The next few years are crucial to his development and I think I speak for most football fans when I say most want to see him grow and perform each week, albeit preferably at United.

Chelsea’s position is complicated by their transfer ban, which will stop them from signing any player this summer unless there’s a big U-turn. Losing both Hudson-Odoi and Eden Hazard now would be some blow.

From our perspective though, it would be great to get one over Chelsea in the transfer market ahead of next season. Either that or we sign Borussia Dortmund’s Jadon Sancho instead.