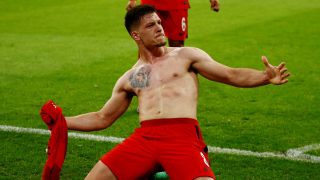 Manchester United are reportedly one of the clubs willing to pay big to secure the signing of Eintracht Frankfurt striker Luka Jovic this summer.

That is if you believe Don Balon, which would lead us to feel you’d believe anything…

The Spanish outlet claim United have joined Real Madrid, Juventus and others in being prepared to spend approximately €80 million for the player.

Barcelona are being strongly linked with a move for the 21-year-old as the report focuses mainly on their quest to find a long-term replacement for Luis Suarez, now 32.

NEXT: Manchester United need a statement signing, and it needs to be Paulo Dybala

Jovic has tons of potential no doubt, but where would his potential arrival leave Romelu Lukaku and Marcus Rashford in the pecking order? Ole Gunnar Solskjaer wouldn’t spend that big on a player if he wasn’t part of his starting plans.

That’s why I’m sceptical about this story just as much as I am about the source.

Chelsea are said to be in the running for Jovic, as per Goal, but as things stand they won’t be able to make any signings this summer due to a transfer ban.

United may sign a striker this summer but you just feel if they’re going to go big this summer, it should go on a right winger or a centre-back as that’s where we lack in quality at the moment.

Next season we’d like to see Rashford become a 20+ goal a season striker. He will need to step up whether United sign a new forward or not.