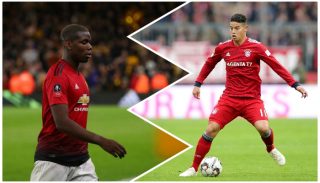 Don Balon stories should never be reported without context: they often tend to come up with transfer stories that seem unrealistic.

Anything reported can be questioned of course, but the latest suggests Real Madrid have offered James Rodriguez as a makeweight in their push to sign Manchester United’s Paul Pogba, as cited by Goal.com. The first approach to sign Pogba comes with a reported 50 million (currency not stated).

The Spanish outlet doesn’t rule out the possibility of Gareth Bale arriving at Old Trafford this summer, a deal that may be more appealing to United.

Pogba recently admitted that it is a “dream” to play for Real Madrid, which would welcome transfer speculation of this nature.

It would be harsh to criticise Pogba for his comments on the Spanish giants as it is most players’ dream to play for Los Blancos.

The question is would United listen to an offer if it involved James Rodriguez?

It’s a convenient headline to run on the back of Pogba’s comments with Bayern unlikely to make their loan deal for James a permanent one, and we’re not convinced he’s a player United would want…

James has been in and out of the Bayern first team during his two seasons at the club. That suggests the hype surrounding him after the 2016 World Cup has not followed through since then.

There’s no doubting the quality of James, who has previously been linked with the Reds, but perhaps it is telling that Madrid were willing to loan him out for two seasons and Bayern seem reluctant to keep him beyond this season.

Is that a warning call? Let alone the reported deal would include one of our best players – one capable of improving any side – so I don’t see United entertaining an approach of that sort.

And, we can only recommend taking anything that comes from Don Balon with a pinch of salt.