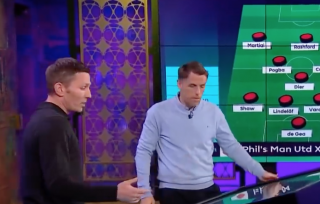 Everyone has their views on how Manchester United should line up next season and Phil Neville is no different.

The club is subject to many transfer rumours, opening up the possibility of new arrivals and a stronger side next term. It looks likely that Ole Gunnar Solskjaer will remain manager and have his input on the transfer window.

Speculation is already doing the rounds already with United linked with different players on a daily basis. It’s hard to keep track of every potential target, but The Independent suggests that the Reds have made Borussia Dortmund sensation Jadon Sancho a prime target.

Many are still demanding a centre-back signing despite some decent performances of late from Victor Lindelof and Chris Smalling, although the Swede should be the one to stay in the line up next season if I were to pick from the duo.

The aim should be to bring in a top-class defender to partner Lindelof. Names such as Toby Alderweireld, Kalidou Kouilbaly and Kostas Manolas will cross the minds of Reds as potential options.

How many players United will sign is anyone’s guess, but Phil Neville had a go at predicting a Manchester United XI for next season. He opts for Gareth Bale over Jadon Sancho on the right.

Phil Neville reveals what his dream Manchester United XI would look like for next season #mufc pic.twitter.com/WZCPHkXUN3

Real Madrid’s Raphael Varane would be his pick at the back while Tottenham midfielder Eric Dier makes a surprise inclusion, not to mention Barcelona playmaker Philippe Coutinho, formerly of Liverpool.

I’m not sure how much Neville thinks Solskjaer has to spend this summer, but no way will the Glazers be so generous with a transfer kitty that size. Varane would cost at least €100 million alone!

Dier replacing Nemanja Matic is an interesting shout. I think United need someone more mobile than the Serb with legs to cover plenty of distance in front of the back four, though unsure the England international is the best option out there.