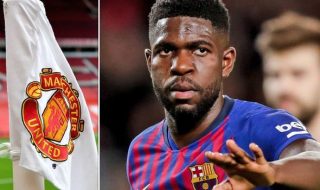 According to the Daily Mail, Barcelona would consider selling Samuel Umtiti to Manchester United this summer if it helped them sign Ajax’s Matthijs de Ligt, with the Reds using the international break as an opportunity to scout the Frenchman when Les Bleus took on Iceland.

It’s no wonder the La Liga champions want the 19-year-old, who along with future Barcelona midfielder Frenkie de Jong has taken European football by storm this season. The Ajax duo are to thank for what has been a successful Champions League campaign for the Dutch outfit, reaching the quarter-finals where they will face Juventus.

Samuel Umtiti already has competition at Barça and doesn’t play every week as it is… If they go out and sign another centre-back, surely the writing is on the wall for the France international?

NEXT: Phil Neville picks his Manchester United XI for next season

The report also claims that United were scheduled to watch Umtiti last night when the French took on Iceland. The Barça man scored the opener in a 4-0 win for France.

United ought to be wary of the 25-year-old’s injury problems, though. After missing three minutes of this campaign due to a cartilage problem in his left knee, it may be best to consider other options.

Watch Umtiti’s goal for France below.

The Mail adds that Barcelona players would be against the sale of Umtiti.