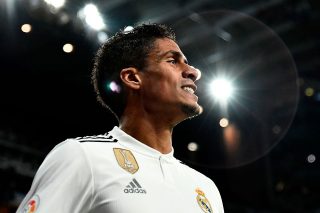 Should Raphael Varane leave Real Madrid this summer there will be several clubs chasing the Frenchman’s signature.

Manchester United are long-term admirers of the centre-back – but it has been suggested that Juventus are also looking at the player as an alternative to the in-demand Matthijs De Ligt, who is probably on his way to Barcelona.

According to Sport, United are set to offer Varane a route to the Premier League but will face stiff competition from Juventus, Paris Saint-Germain and Bayern Munich.

All four clubs said to be interested could afford Varane but it’s likely to take a hefty price tag to tempt Real Madrid to part ways with the defender.

The Mirror claims he has a whopping €500 million release clause meaning clubs have no other choice bu tot to try negotiate a lower price with Los Blancos.

Speaking about his future recently, Varane told reporters, as quoted by Bleacher Report: “To say that I am not happy at Real Madrid is not true.

“I’m at Real Madrid. The biggest club in the world. I’m constantly in a state of challenging myself because the requirement here is that of the highest level.

“I’m focused on my career. We had a tough time in the middle of the season where we had to fight. I’ve given my all in this shirt and I can be proud of that.

“I cannot control everything that’s said [in the media]. Many things aren’t right but I can’t say I’m unhappy in Madrid.”

Attention comes quickly when the best players suggest their futures are unclear, and that appears to be the case for Varane at the Santiago Bernabeu.

He would be a top signing for United!