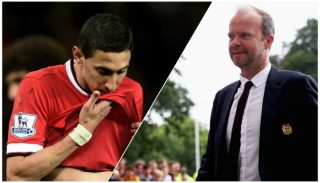 Recent transfer policy at Manchester United has been hit and miss, to put it mildly with more misses than hits. Numerous transfers have more often than not flopped like Angel di Maria, Falcao, Memphis Depay to name but a few. Since Sir Alex Ferguson retired at the end of the 2012/13 season and since then transfers have been one of a number of problems the club has faced trying to get back to winning ways.

The club has favoured the Galacticos approach that Real Madrid adopted in the early 2000s to great commercial success but not quite the on the pitch success they should have had. The Glazers have tried to copy this approach by signing big-name players to varying degrees of success, Di Maria lasted one season as did Falcao as he was only on loan but didn’t do enough for the club to decide to make it permanent. Memphis Depay did/still does have lots of potential, but it seems Old Trafford wasn’t the right place for him.

NEXT: Solskjaer held talks with Man Utd star who felt down after FA Cup defeat

Since Sir Alex Ferguson retired Manchester United have signed 27 first team players, but how many of them have been a success? Lots of them have been failures with one or two success stories but the majority have been in between neither great nor bad.

The strategy of the club seems to have shifted to signing high profile players for commercial reasons, not football reasons. This summer is huge for everyone involved as with a new manager being named permanently in the next few months then strategies need to be put in motion.

In 2003, Claude Makelele moved to Chelsea and David Beckham left United for Real Madrid prompting the infamous Zinedine Zidane quote of “why put another layer of gold paint on the Bentley when you are losing the entire engine?” Makelele was the heartbeat of Madrid and moved to Chelsea helped them form the backbone of the first spell of Premier League dominance under Jose Mourinho. A business decision was made to bring Beckham in to sell more shirts and Makelele was pushed out because he wasn’t high profile or sexy enough to sell merchandise. Ed Woodward seems to be following this type of model to get big-name players in to keep the commercial revenue up maybe to the detriment of the footballing side of the club

The quicker that football decisions at United are made by the football side of the club the better, the players signed in the years after Sir Alex have been poor, to say the least with notable exceptions. The right players need to be signed not necessarily the biggest names, players who fit in with the style and ethos or someone who brings something currently lacking in the current squad.

The biggest problem now for all fans is the rise of FIFA/Football Manager as well the ability to watch most games on the planet online means everyone has opinions on players from other countries and leagues. We all are guilty including myself of singing the praises of a player and wanting the club to go out and sign them because I have seen them play well in another league or competition.

Whoever Manchester United sign is met with hundreds of thousands of tweets with opinions on the said player or another player who we should have signed instead, but the club should get players to improve the squad and the other aspects should come second. If you look at Liverpool for example (I know this won’t be popular but bear with me), Andrew Robertson was signed from relegated Hull City and is a key player, as is Georginio Wijnaldum who they signed from Newcastle after they were relegated as well. Both players have been key players in a title push this season and both have proved that they were the right players to improve their squad not necessarily the biggest names. Also, Xherdan Shaqiri was bought from Stoke again who were relegated and he has also contributed enormously to them this season.

United’s squad has holes in it, but it also has building blocks in it to make it great again, not only in terms of ability but one thing United need to add is some characters to the squad and leadership. The squad is young but just needs one or two experienced players to bring them on and help them develop, of course, this depends on who the manager is, but I feel that the last few pieces of the jigsaw will be tough to add. Everyone knows how good the Koulibaly/ Sancho/ Ndombele’s of the world are but if they won’t fit into what the next manager does then it doesn’t make sense to sign them.

For the next few months everyone, including myself, will be pitching players who the club should sign but ultimately it is up to the next manager which players the club should be signing. Patrice Evra, Park Ji Sung, Nemanja Vidic, Steve Bruce, Gary Pallister, Denis Irwin were all examples of players who signed for lesser fees and fanfare and were not exactly Galacticos in terms of names or stature, but they proved to be some of the best players the club has had over recent years.

We have been seduced into thinking that the best players cost the most money but some of the best players have been bought for a lot less. The point of this is just to say that as United will be linked with enough players to fill Old Trafford between now and when the transfer window shuts, we need to remember just because a player doesn’t cost a king’s ransom that they aren’t a good player.

Sometimes it is not about signing the best players it is about signing the right ones, over the last few years we have wasted money left, right and centre of high-profile players to take us back to the top. Maybe we should just focus on what they can give us on the pitch rather than their price tag or how many shirts they can sell.