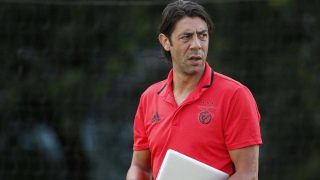 Benfica attacking midfielder Joao Felix has attracted a lot of attention this season, including some interest from Manchester United.

Rui Costa claims his side will do their utmost to keep the 19-year-old ‘as long as possible’ but he’s not stupid and knows Felix has a price and that the clubs interested could definitely match the price.

“Someone called him my heir. Or the new Kaka. The truth is that Felix is only Felix,” Costa expressed in an interview with Tuttosport.

“He has an extraordinary sense of play and he has a rare ability, he can guess what will happen in front of the goal. He is a modern No. 10, a second striker with a remarkable sense of goal, he scored 10 goals in the league.

“€120 million release clause? We will try to keep him as long as possible, this applies to Felix as it does to all the others. This is the club’s policy, then we will see why we are aware that the clauses exist and that certain players cannot be held back indefinitely in Portugal.”

In 32 games this season across all competitions, Felix has scored 12 goals and created 5 assists. Not bad for his breakthrough season but it’s worth noting his versatility and ability to play on the left wing as well.

Considering the way we’ve played under Ole Gunnar Solskjaer since December, I think it’s doubtful that he will go out and sign a new No. 10 this summer when one isn’t needed.

United tend to create from deeper positions when Paul Pogba is on the pitch and the likes of Juan Mata only really feature out wide on the right. It’s not his ideal role, but that’s how we play and Solskjaer is hardly going to change that by spending massive money on an unproven star this summer?