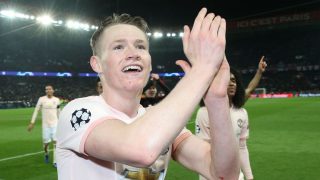 We get a bit of insight into Scott McTominay’s everyday life away from the football pitch in a recent interview with ManUtd.com.

The Scotland international revealed his admiration for Swiss tennis player Roger Federer: “Someone who has been at the top for so many years is Rodger Federer. I like my tennis. I don’t really get much chance to play because it’s quite hard to play and there’s lots of twisting and turning, and you don’t want to get injured. I always watch Wimbledon, and the other major championships as well.

“I’ve never been but it’s certainly on the bucket list. Football-related I’d say Cristiano Ronaldo. He just keeps his standards so high every year and he’s always achieving new goals and new heights, and just keeping it going.”

Federer and Ronaldo are two inspirations for athletes of all sport. How they’ve maintained the highest of performance levels for years is astonishing and young players like McTominay should try take a page from their book.

Like, finding out how these guys at the very top prepare for big events and upcoming matches.

McTominay was asked in the same interview about his favourite method of relaxation. He said: “The Hale Country Club is a place where I go quite a lot. It has a gym and there are some nice restaurants in there, and you can go to the pool outside. Especially after football, it’s nice to go there when you’re a little bit tired and just chill out, because sometimes just sitting at home can be a little bit long!”

Finally, the youth team graduate opened up about being addicted to football, which is a useful addiction for any footballer.

“I’m never not watching football on Instagram. That’s what I do when I’m scrolling through. Highlights of other players, highlights of games – Premier League games, Championship, Champions League, even other leagues like Serie A. I’m football mad!”

It makes you wonder about professional footballers who maybe don’t like the game as much. How do they cope?

Former Tottenham full-back Benoit Assou-Ekotto told The Guardian he only played football for money, not passion.

Most of us are in jobs we don’t like, but there’s financial luxury being a footballer. It mustn’t be all that bad!

McTominay will hope he can get back into the United team when the international break ends. He put in some decent performances before Nemanja Matic returned from injury, including that memorable night in Paris.

Nobody is expecting him to dominate Europe from our midfield, but that doesn’t mean McTominay can’t be a useful player for United.