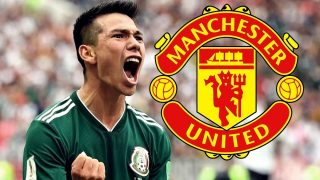 Manchester United have stepped up their interests in signing PSV Eindhoven’s Hirving Lozano, according to reports.

Italian newspaper La Gazzetta dello Sport, as cited by The Mirror, claim United have turned their attention towards signing Lozano, but are likely to face competition from Serie A side Napoli, who are also reported to be interested in the winger.

The Mexico international has scored 19 goals and provided nine assists in 34 games for PSV this season, and this alleged interest only furthers our belief that United will sign a right winger this summer.

It is reported that United have already begun negotiations with Lozano’s agent Mino Raiola as they attempt to gazump the Italians, currently managed by Carlo Ancelotti.

Arsenal are said to be in the running for Lozano’s signature too, though with his record for this season it should be a surprise to see so many keen clubs.

Lozano was one of the star players at the World Cup last summer, providing some brilliance to give Mexicans something to shout about.

The Mirror claims Chelsea have watched the player but won’t pay more than £32 million – but they might be out of the equation totally if that transfer ban remains.