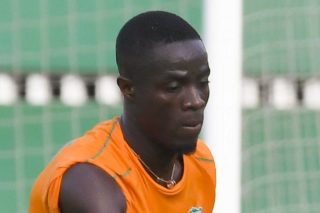 Manchester United have been hit with another injury doubt after Eric Bailly collided with a teammate in Ivory Coast’s 3-0 win over Rwanda.

While several United players have been withdrawn due to injuries, others are still on international duty and run the risk of injury. That will always be our perspective as United fans on international football, even if some still enjoy it and get a buzz off watching their favourite players perform for their countries.

Eric Bailly took part in Ivory Coast’s recent victory over Rwanda and scored their second goal of the game. He finished in the air from a corner, which is typical of a centre-back.

The goalkeeper should do better, but take nothing away from Bailly’s ability to out jump the opposing defender.

But sadly the game didn’t end as planned when Bailly had to leave the pitch before full-time after he reportedly sustained an injury after a collision with his own teammate.

Eric Bailly involved in a nasty head challenge, his teammates running for his help with one of the defender opening his mouth to check if he’d swallowed his tongue. @ManUtd #MUFC

It sounds like the whole incident got frightening with the 24-year-old’s teammates thinking he had swallowed his tongue following the collision. As reported, they opened his mouth to check.

United have had to deal with lots of injuries over the past month and the last thing Ole Gunnar Solskjaer needs now is a reoccurrence.

Bailly may not be a preferred centre-back at the moment, but we’ve some big games coming up and everyone will need to be fully fit in order for United to come out of it all still in hope of a top four finish and a place in the Champions League semi-finals.

Victor Lindelof and Chris Smalling are the main starters in defence under Solskjaer, but an injury to either or two of them would offer some of the other defenders a chance to step up. Not that any of them have given us reason to think they would.