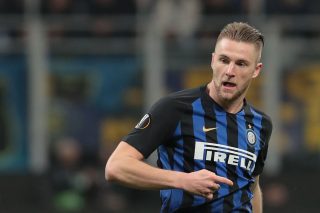 Inter defender Milian Skriniar is reportedly set to attract the attention of several Premier League clubs this summer, according to TeamTalk.

They claim Skriniar could be available for as little as £30 million, which is a bargain for a top centre-back. Manchester United and Liverpool are the two clubs headlined in the piece, but it is also stated that Arsenal, Chelsea, Manchester City and Tottenham are scouting the Slovakian.

The 24-year-old has been a long-term target of United, popping up in the gossip columns regularly when José Mourinho was in charge. A deal never materialised but the latest from Tuttomercatoweb suggests United even made a big offer worth around £72 million for his signature.

That’s a slight difference from the £30m reported by TeamTalk…

However, United are still in need of a new centre-back. Preferably someone to partner Victor Lindelof in the heart of defence, with Chris Smalling ultimately becoming a squad player.

And, if this is anything to go by it seems likely that a Premier League switch is on the cards for the Inter Milan defender, who would make a positive difference at any of the clubs he’s being linked with.

ESPN have also linked United with a move for Napoli defender Kalidou Koulibaly.