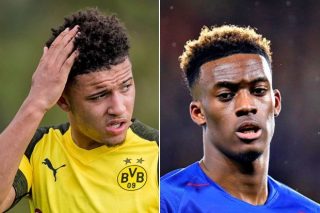 According to the Daily Mail, Manchester United have joined the race to sign Chelsea’s Callum Hudson-Odoi.

The extremely talented 18-year-old was on the verge of joining Bayern Munich, even going as far to hand in a transfer request at Stamford Bridge, Chelsea rejected offer after offer from the German champs.

Hudson-Odoi was forced to stay at Chelsea, as reported by The Guardian, but he needs more game time and Maurizio Sarri has done anything but promise that.

As you can see from the tweet below, at least one United fan read the transfer report through a more sceptical lens.

In the Mail article linking United to Hudson-Odoi, “Manchester United” is the first two words and then they are not referenced to or mentioned again.
It’s almost like they are using the name of the club for no other reason than to get folk to click or buy the paper.

United are also reportedly interested in Borussia Dortmund sensation Jadon Sancho, formerly of Watford and Manchester City, though it has been reported by The Independent that he’s going to be this summer’s prime target.

Both Hudson-Odoi and Sancho are new to the England set up, but this is a perfect situation for any manager at international level. The pick of two wingers who have potential to become world class.

So, who do you want to see on the right wing next season? It’s an area in need of strengthening with no specialist right winger in the current United squad.

United attack mostly from the left which makes our play with possession rather predictable. Fix that and United should also have a more potent attack enhancing our ability to cut through teams.

This is where United scouts make their money, deciding which option would suit the team best in the long-run.

Sancho sounds more appealing and his breakthrough season at Dortmund will be difficult to match.

I reckon Hudson-Odoi will only become a prominent target if a deal for Sancho becomes unlikely.

It could also be used as a tactic in the media to unsettle Sancho, perhaps trying to force his hand by suggesting now or never?

Right now, it looks like Hudson-Odoi will try engineer a move away from Chelsea again this summer whereas Sancho is already after breaking through and earning a spot in the Dortmund team.