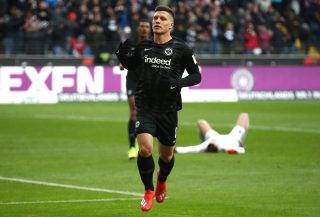 That is according to O Jojo, a Portuguese newspaper, cited by The Metro, who claim the Reds are interested in signing the 21-year-old and have already made contact with the Bundesliga over a summer move for their Serbian star.

If United’s interest is genuine, we’re likely to face stiff competition from Barcelona. This week The Guardian claimed Barça are preparing a €50 million bid to sign the striker, who has scored 15 goals in 24 Bundesliga matches.

The 21-year-old is currently on loan from Benfica and it remains uncertain where he will be next season.

Ole Gunnar Solskjaer may look to sign attacking reinforcements this summer, with United already linked with moves for Antoine Griezmann and Paulo Dybala, but the team needs to improve defensively as well.

This transfer saga is worth keeping an eye on. It could see Barcelona and United go head-to-head like they will in the Champions League quarter-finals.