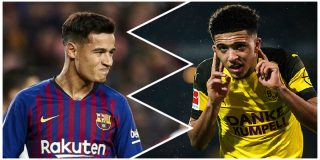 According to ESPN, Barcelona are open to selling Philippe Coutinho should they receive a bid in excess of £90 million.

The report notes the Brazil international’s desire to stay at Camp Nou, but the La Liga champions have supposedly decided to cut their losses on Coutinho by moving him on in the summer.

Manchester United have popped up regularly in the media as a possible destination for Coutinho, who has been in and out of the Barça starting line-up this season, but it’s now clear the club could land the playmaker if their interest is genuine.

The update provided by ESPN makes it no secret that Barcelona have given up on the former Liverpool star. A source allegedly said: “Barcelona do not have a firm offer from any club at this point, but some have expressed an interest in the player.

“Key people, who are either directly or indirectly linked with various clubs have been following the situation closely.”

A potential £90m sale of Coutinho would see the La Liga giants make a £15m loss on the player, after he joined from Liverpool for £105m in January 2018, as reported at the time by ESPN.

There is no disputing Coutinho’s quality but United could do so much better for that sort of money.

Jadon Sancho may not be the player Coutinho is now, albeit stars in different attacking positions, but the Borussia Dortmund star would be a more fitting transfer to enhance the current squad.

While it would be harsh to call Coutinho a flop at Barcelona, he hasn’t reached the extremely high expectations that likened him to Andres Iniesta. United would be signing a player whose performances have dipped over the past year and that doesn’t settle well with demands of £90m…

United would be better to prioritise Sancho. The days where £90m represented good value for Coutinho were short lived.