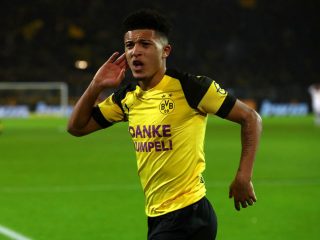 The latest development in the Jadon Sancho transfer saga is Manchester United are confident of being able to convince Borussia Dortmund to sell their teenage sensation this summer.

A source allegedly told the Evening Standard “they [United] are doing everything they can to sign him” in an article that was published this morning.

The England international has emerged as one of Europe’s most exciting prospects after his breakthrough season in the Bundesliga. He has scored 9 goals and created 13 assists so far this season, as per WhoScored, so there are clear signs this kid has the potential to take world football by storm.

Dortmund’s public stance is that Sancho is not for sale at any price. A common line used by under pressure clubs these days, despite everybody knowing all footballers have a price.

NEXT: Pogba’s comments on Real Madrid should be taken with a pinch of salt

The Independent claims United are willing to spend over £80 million for Sancho’s signature, which is enough to suggest the club will make him a prime target for the summer, as being reported in the Evening Standard piece above, adding that Paris Saint-Germain are also tracking Sancho’s situation but United believe he could be persuaded by returning to England and becoming a Premier League star.

Ole Gunnar Solskjaer is still to be confirmed as United’s next manager, but he has admitted already that he is playing a part in the club’s summer transfer plans which indicates that he will probably be gaffer beyond this season.

He would be right if one of his objectives this summer was to sign a specialist right winger, giving up on makeshift options each week that shows our attacking line-up lacks balance most weeks.

If United could sign a fast player with an eye for goal to the right, like of Anthony Martial’s ability on the opposite flank, it could make us a more potent force going forward.

Additions are need in defence and midfield too, so we’re expecting a squad rebuild of some sort in the coming months.

Sancho is currently on international duty with England ahead of the Euro 2020 qualifiers.

Here’s how Twitter reacted to the latest surrounding Sancho.

Dortmund are a selling club, give them what they want and Sancho is our number 7 for 10+ years 👍🏻 #mufc

Jadon Sancho at United would be the dream. The English connection with Sancho, Lingard and Rashford 😍 #MUFC pic.twitter.com/hD458stwC0

Apparently we’re free to sign Sancho as City never inserted a clause saying we can’t. We should go all out for him because this is an insane opportunity.

Manchester United can chase Borussia Dortmund and England winger Jadon Sancho this summer because his former club Manchester City did not insert any clause in the 18-year-old’s contract after selling him stating he could not join their rivals.

Man Utd are willing to do anything in their power to sign Jadon Sancho & are willing make an offer in excess of £80m in a bid to lure him to Old Trafford, according to reports

If we actually get Sancho we will have to change the lyrics to “we’ve got Sancho, Paul Pogba, and Fred” #MUFC #olesatthewheel