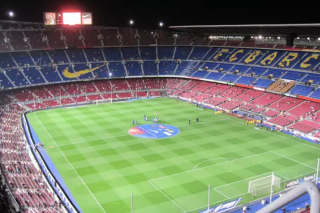 The £102 that Barcelona will charge Manchester United fans for a match ticket next month’s Champions League quarter-final is the most expensive in United’s history bar from a final.

United are annoyed by Barcelona’s pricing so they’ve reluctantly increased the price for Barça fans at Old Trafford. That’s a fair policy, but Adam Crafton of the Daily Mail suggests a way United could come out of this looking like ‘heroes’…

#mufc may think they come out of this looking like heroes. But better response would be for United – out of own pocket – to cover the difference and then charge Barca fans a fair rate. That would embarrass Barca. https://t.co/6M5gcApjrJ

The greed of Barça means both sets of innocent fans now must suffer the price, but United fans will mostly agree with their club’s stance, to hit back.

Hopefully they have the same attitude on the pitch to hit Barça where it hurts. Travelling fans who already have flights and hotels books will be understandably pissed off, but this wasn’t caused by the Premier League giants.

It is understood that United’s decision to raise the price to the same sum from £75 will be used to subsidise the travelling fans going to Catalonia.

A statement from United read: “We believe that our travelling supporters are again being subjected to increased/excessive ticket prices from the host club.

“We have again taken the difficult decision to charge Barcelona fans the same amount Barcelona are charging for the away fixture (£102). We will use the additional revenue gained to subsidise our travelling support by paying the £27 price difference.”

All in all, this is just another example of football fans being priced out of the game.

United host Barcelona on April 10 at Old Trafford with the return leg scheduled at Camp Nou the following week.