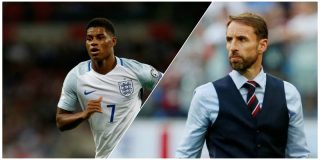 England have been dealt a blow ahead of their upcoming Euro 2020 qualifiers after Gareth Southgate confirmed an ankle injury will rule Marcus Rashford out for the games.

The strike becomes the second United player to pull out of the England squad with Luke Shaw also nursing an injury.

Caretaker manager Ole Gunnar Solskjaer could find himself in a difficult situation if two of his starting players aren’t fully fit to take on Watford on Saturday, March 30.

NEXT: Barcelona set highest-ever ticket price in United’s history, outside of finals

Gareth Southgate addressed the issue during a press conference, as quoted by The Irish Times: “He’s been with our medical team all week and we’ve tried to progress him but it’s clear he’s not going to be ready for our matches so we’ve sent him back.

“We knew Marcus might not be ready so it’s a good opportunity for others.”

United have been heavily linked with a move for Borussia Dortmund sensation Jadon Sancho, as per the Evening Standard, so Reds may get another chance to see the former Manchester City winger in action.

Recent performances may indicate that United players are suffering from a more intense style of player and it will take everyone time to adapt their game after playing under pragmatic managers, who were less demanding when it came to pressing opponents.

However, every league game between now and the end of the season is crucial towards the Reds’ top four hopes, so it is important that our players recover from injury and get the rest needed before a busy schedule for United takes place.

The United starlet announced that he will be supporting the Three Lions from home, in Manchester.

Still carrying my injury from last week so will be supporting the boys from home, come on @England ⚽🛋 #ThreeLions

Rashford and Shaw will both want to be back for United’s first leg against Barcelona at Old Trafford.