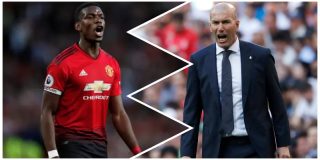 The Daily Mail have done their bit to stir a transfer saga regarding Paul Pogba ahead of the summer transfer window.

The media outlet ran quotes from an interview Pogba did whilst away with France on international duty and speculate that it fuels speculation he could leave Manchester United for Real Madrid.

‘Like I’ve always said, Real Madrid is a dream for anyone. It’s one of the biggest clubs in the world,’ Pogba said, as quoted by the Daily Mail.

While he says nothing wrong, it’s golden for clickbait.

It is our understanding that Pogba is a lot happier since Ole Gunnar Solskjaer arrived to replace José Mourinho as caretaker manager. His performances have improved and The Sun recently claimed he wants a new contract to stay longer at the club.

If you asked me 3 months ago, I would have told you Pogba leaving this summer was a strong possibility. Now I’m less sure.

In the referenced interview above, he was asked about Madrid and Zidane. I don’t see the issue after he went on to say he’s happy at United for now.

The last part shouldn’t be ignored and refusing to answer the question would have led to more speculation.

Whoever asked the question knew it would get some sort of headline and that’s their job, but you have to ask yourself does this really warrant a heated reaction like it is likely to get from many?

Who is going to deny that playing for Madrid would be a dream? These shit stirring articles that are oblivious to context will sadly lead to knee-jerk reactions.

And, who will stop Pogba from leaving if that’s what he wants this summer or beyond?

I wouldn’t worry about it.