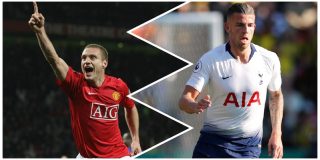 Nemanja Matic believes Manchester United should be looking to add to another area first before signing a centre-back this summer.

This comes on the back of a season when United have been terrible at the back. Things may have improved slightly in that regard under Ole Gunnar Solskjaer, but not enough that would make you think this side could challenge on all fronts next season and that must be the aim for United.

The Serb had an incredible career at Old Trafford and fans respect what he has to say.

Vidic was asked about the potential arrival of Tottenham Hotspur defender Toby Alderweireld and while he believes the Belgian would be a good signing, the former centre-back thinks United should prioritise signing a midfielder first.

“Of fource, I would like to see him [Alderweireld] there,” Vidic told Stadium Astro, as reported by the Metro. “But I think the club has to have a priority.

“What I see is, if you want to be in the Champions League next season and challenge for the Premier League, you have to strengthen the midfield.

“You need that depth in the midfield area.

“In defence they already have five players, so they can rotate, and it seems like they’re doing well.

“There has been a lot of criticism for the defenders but if they are compared to other Premier League teams, Manchester United are not that bad.”

Is there any way to share two different priorities? United have enough money to bolster both areas this summer, if they’re serious about challenging next season.

It would be ultimately unfair to give Solskjaer the job and not allow him to build his own side too, but José Mourinho had his problems with Ed Woodward not long after being handed a new contract.

But we can’t go into next season with the five defenders already on our books, willing to rotate them throughout the season. That won’t work and we won’t compete for the title again.

Alderweirled would be a good signing because he’s run down his Spurs contract and can leave on the cheap, but should United be going out to sign a younger centre-back like Kalidou Koulibaly?