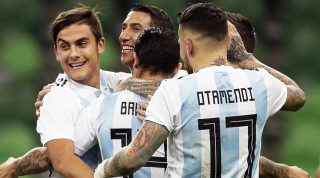 Reports today suggest Juventus star Paulo Dybala has rejected the proposal of a transfer to Inter Milan because he prefers a move to England.

Paulo Dybala has said no to Inter Milan (in exchange for Mauro Icardi). #mufc have been in frequent contact for Dybala. His refusal to Inter is motivated by the interest of English clubs amongst other things #mulive [tmw]

That’s sure to spice up the gossip columns with United recently linked with the Argentine playmaker, as per the Manchester Evening News.

His role in the Turin side’s team has changed a bit this season and he’s no longer seen as the key figure he was just 12 months ago. However, the arrival of Cristiano Ronaldo may have something to say about that…

At 25, Dybala will be looking for his big move should he leave Juventus this summer. It doesn’t get much bigger than the Serie A giants but a move to United would certainly be justified.

It is concerning for Dybala that he has only started four games in 2019, and it has led to plenty of speculation surrounding his exit.

If Real Madrid really have the summer spending spree many are predicting on the back of a poor season for the European champions, you can be sure they will consider opting for the Argentina international too.

Dybala thrives most as a No.10 so it’s not surprising to see a report on Tutto Mercato claim that Liverpool have stepped up their interest in signing him.