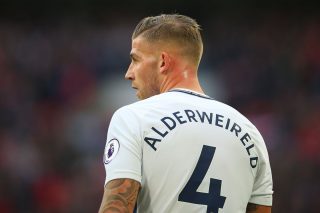 Tottenham may have no other choice when it comes to losing Toby Alderweireld this summer.

Alderweireld, 30, should be looked upon as a top defender with vast experience, not some washed up veteran looking for a retirement home.

The centre-back’s future has been up in the air for over a year now at Spurs with Manchester United heavily linked with a transfer that never materialised last summer.

Alderweireld recently turned 30 and some United fans may feel it would be best to sign a younger defender instead, but this season he hasn’t looked as if he’s lost a step.

There are no signs of Alderweireld declining just yet and he recently told reporters that he feels younger than his actual age.

Perhaps like another former Ajax player, Zlatan Ibrahimovic, Toby can mature like a fine wine and have a positive impact at Manchester United.

Tottenham have been unable to strike a new deal with the Belgium international and there’s a release clause of just £25 million looming, which makes a summer move likely.

Toby Alderweireld says he does not know if he will be a Tottenham player next season.

Like United, the London club have plenty of options at centre-back, but when it comes down to consistency and quality Alderweireld is the best man to partner fellow countryman Jan Vertonghen.

Daniel Levy is now under pressure with Spurs about to lose one of their best players for a minimum price. His may be about to have egg on his face for not securing a better deal for the defender last summer.

Unless Spurs pull off a dramatic U-turn and bow to Alderweireld’s wage demands, he will leave this summer and probably for a bigger club. United could find themselves landing a bargain deal for one of the Premier League’s best defenders and one with experience at the highest stage in Europe.

What’s not to like about that while we bolster other areas on the pitch?