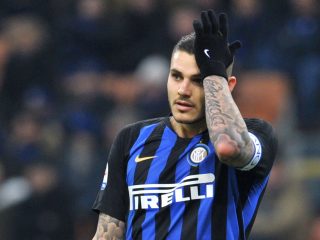 Mauro Icardi’s first autobiography was released when he was 23. At that point, he had not won a single trophy for club or country and the autobiography had already become the centre of attention.

After Inter’s defeat to Sassuolo in the 2014-15 season, Icardi’s shirt was handed back by Inter Ultras and that left the Argentine incensed. His response to that came in the autobiography and he said: “How many of them are there? Fifty? A hundred? Two hundred? OK, record my message and let them hear it. I will bring 100 criminals from Argentina who will kill them on the spot.”

That was one of the first controversies Icardi has caused as an Inter player. The recent one has done everything to put the club to shame and destroy the morale in the dressing room. It gives you an impression that everything at Inter is about Icardi and Wanda Nara, despite them having beaten AC Milan in the Derby della Madonnina with Lautaro Martinez up front.

Icardi’s cryptic Instagram messages and Wanda’s weekly comments on the talk-show she regularly appears on- Tiki Taka, have not helped Inter at all. The Nerazzurri should be glad that they have a strong CEO in the form of Beppe Marotta, who tolerates no nonsense. Icardi was ruthlessly removed as captain and hasn’t featured since then, as both parties are yet to hold talks about a new, improved deal for the player.

Some Manchester United fans are surely licking their lips at this idea of signing the Argentine in the summer. But it is hypocritical to not want Douglas Costa because of his behavioural issues but want Icardi because of how good a player he is.

It is not to say that Icardi is a bad player. He is one of the most potent strikers in the world on his day. While he was on a barren run since having scored in early December, Icardi still is a quality player. He may not be on the ‘world class’ level, but he lies just a notch below that batch of players.

He is still 25 and on the same level as Romelu Lukaku. If one has to make an XI of Europe’s best players, neither Icardi nor Lukaku would be starters in it. Those like Harry Kane or Luis Suarez will be.

Last season, Lukaku had scored only two fewer goals than Icardi in all competitions- 27 to Icardi’s tally of 29. That, when his first season at United was dubbed to be a ‘settling in’ season by many and he wasn’t at his best sometimes.

In the season before that, Lukaku was at Everton. And he scored as many goals as Icardi that season- 26.

It is also crucial to note that both of the players are of about the same ages- 25 and 26. They are similar type of players, bar the fact that Lukaku is more physically adept and has a slightly underwhelming first touch a lot of times. Icardi is not the complete striker that Suarez or Kane are on their day.

With Lukaku on a good run of form recently under Ole Gunnar Solskjaer – having scored six times in three games, it makes little sense to bring another striker in. Especially when Marcus Rashford has done an impressive job playing in that free-flowing system under Solskjaer. He is still 21 and United can’t afford to not give him the room to develop as his growth did stagnate to an extent under Jose Mourinho.

Getting Icardi would represent the failures of the board to make sensible transfer decisions. It would show that they are incapable of making decisions that best represent the values of the club and would go on to stand for the fact that the club that has always been proud of believing in the long-term building has lost itself.

More than that, Icardi’s agent and wife Wanda Nara never shuts up. Week after week, there’s a new tantrum. She either gives insight into something she should not or she speaks against the club his husband is playing for. If not that, she slams the club by breaking down on camera to seek sympathy. Ask Inter, everything Wanda does puts the club in a bad light. And the player takes no responsibility to correct the wrongs.

Asking for a new deal with more money isn’t wrong at all. But painting it on walls across the world that the club is bad helps no player. And refusing to play does no good. If a player really wants to stay by signing a new deal, he should prove his might by playing every week instead of withdrawing from the squad in a Europa League game against Eintracht Frankfurt.

Manchester United fans hate Angel di Maria to the core when he did something that isn’t even close to what Icardi does. Some still hate Paul Pogba for what he used to do under Jose Mourinho. It is time to stay away from Icardi or prepare for cancer later.