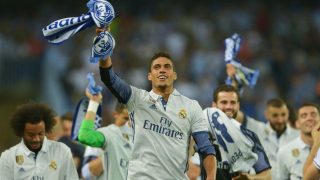 Real Madrid defender Raphael Varane is considering his future at the Santiago Bernabeu and could leave in search of a new challenge after a difficult season for the Spanish giants, according to French newspaper L’Equipe.

While the French centre-back is regarded as one of Europe’s best defenders, he didn’t start the 2018/19 campaign very well despite having just won the World Cup.

Varane was linked with a move to Old Trafford way back in 2011 before signing for Real Madrid. He won’t have any regrets about making that decision, of course, after enjoying great success at the Bernabeu.

But that doesn’t mean he won’t fancy a move to United now. Madrid are currently at crossroads, hoping Zidane’s return will prompt a significant revival though it’s early days and Varane may want to experience football in a different country.

Moreover, Real Madrid have already secured a centre-back signing for next season after announcing the signing of Eder Militao from FC Porto for €50 million, as reported by The Guardian.

As noted by ESPN’s Dermot Corrigan, the signing of Militao means Madrid should be well stocked in defence next season, though the young Brazilian could be seen as a replacement for one of their current defenders.

Zidane leaving quite clear today that he wasn’t closely involved in Militao signing – interesting one as plays right-side, like Varane, and already have Carvajal and Odriozola for RB.

It will come as an immediate blow for Zidane if fellow the Frenchman does want to leave the club this summer.

United are in need of a world class centre-back to partner Victor Lindelof beyond this season. Names such as Kalidou Koulibaly and Toby Alderweireld have been mentioned as potential targets, but things could change if Varane becomes available.

Varane may also like how there’s a couple of his French teammates currently playing for United, with Paul Pogba and Anthony Martial having key roles in the side.

This development could see United splash out!