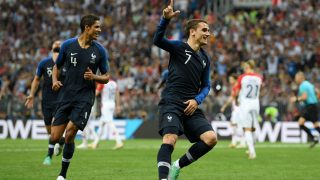 On Monday ESPN ran a report on Antoine Griezmann offering himself to a number of Europe’s biggest clubs, but Sport now claim Manchester United are frontrunners for the French star’s signature.

The report from Spain notes that Bayern Munich are considered frontrunners too, though it emphasises United’s interest as significant.

Bayern will probably start a rebuilding process this summer. They could still win the Bundesliga, but they’re nowhere near as good as they were in recent seasons and crashed out of the Champions League after two below par displays against Liverpool in the previous round.

Griezmann has held talks with United in the past but a move never materialised. At Old Trafford he could link up with fellow countrymen Anthony Martial and Paul Pogba, who would be sure to help him settle in Manchester on the back of arriving from sunny Madrid.

A return to his homeland could also be on the cards if Paris Saint-Germain come knocking. The Ligue 1 champions are on course to win the league again and may want to add Griezmann to an already fearsome attack with Neymar and Kylian Mbappe as they attempt to go further in Europe next season after crashing out of the Champions League Round of 16 this season.

The ESPN report which has been credited above states that Barcelona are not looking to sign Griezmann this summer. While they seek a long-term replacement for Luis Suarez, it is believed the Catalans want a younger attacker than the 28-year-old.

United may try to offload Alexis Sanchez in the summer after a horrid one-year at the club. The former Barcelona man has been a complete flop at Old Trafford and fans will warm to the idea of signing Griezmann instead.

As long as Griezmann doesn’t do any funny turns this summer, it looks like he will finally leave Atletico Madrid.