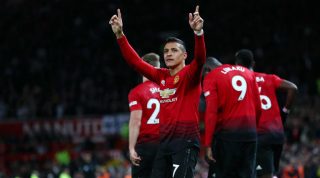 Alexis Sanchez remains determined to succeed at Manchester United and insists he still has belief in his ability to play at the highest level.

The Chile international, who is currently absent due to injury, has been a flop since joining United last year. We’ve hardly seen glimpses of his best days in an Arsenal shirt and patience is wearing thin.

Sanchez has scored just five goals in 41 appearances for the club and is behind Anthony Martial and co in Ole Gunnar Solskjaer’s pecking order.

He must look to the other attacking players who have improved under Solskjaer thinking when or if his break will come.

“I want to keep showing my love for football,” Sanchez told Inside United. “I know what I can do. I have belief in my ability.

“United are such an important club, not only in England but on a global level, and I would love to help bring a trophy to the supporters.

“When we lost last year’s FA Cup final to Chelsea, I was not happy. Not happy at all. In fact, I was sad because I just wanted to make our wonderful supporters happy.

“When I was younger, I liked United. I swear. As a small child I liked United, I really liked them and I want to show this and bring the people joy because, obviously, I want to win.”

If you didn’t get it the first time, Alexis Sanchez liked United as a child.

Good to hear – but it’s time to let your feet do the talking. In fact, it’s actually overdue.

United are unlikely to win the Champions League so it’s probably going to be another season without a trophy, but since December we’ve turned things around and that should give everyone a feel good factor going into next season.