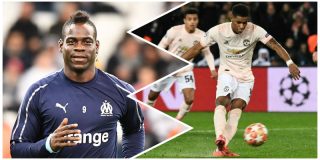 Mario Balotelli wore his own customised Marcus Rashford shirt to troll Paris Saint-Germain with if he happened to score during Marseille’s trip to the Parc des Princes.

Mario Balotelli reportedly had a t-shirt with the face of Manchester United’s Marcus Rashford underneath his Marseille shirt in case he scored & celebrated vs. PSG this evening. #PSGOM https://t.co/oxtYykVRIi

Ironically, Balotelli didn’t score so you could say PSG had the last laugh as they won 3-1 thanks to goals by Kylian Mbappe and two from Angel Di Maria.

NEXT: Barcelona’s Luis Suarez to undergo tests on ankle, could miss first leg of Champions League tie vs Man Utd

To make it even worse, Balotelli was substituted halfway through the game, so he never quite got to annoy the PSG fans.

Why was Balotelli wearing a Marcus Rashford shirt?

The United striker scored a decisive penalty as Ole Gunnar Solskjaer’s men completed the most unlikely of comebacks to knock PSG out of the Champions League earlier this month.

Balotelli had no problem donning Rashford’s face on his shirt — beneath the jersey – despite his previous links to Manchester City and Canal+ claim the Italian striker would have unveiled the T-shirt in celebration had he scored against PSG last night.

The lads at United will undoubtedly get a laugh out of this as it would have been another chapter in Balotelli’s book of crazy tricks. Rashford in particular would have enjoyed it.

Marseille were down to 10 men after goalkeeper Steve Mandanda was sent off shortly before Di Maria’s brace. At that stage, they were unable to get back into the game.

PSG are now on top of Ligue 1 with a 20 point gap AND have a game in hand over second-placed Lille. 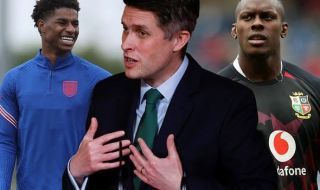