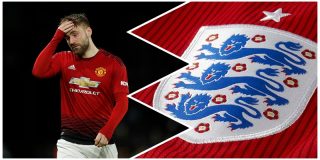 England face Czech Republic and Montenegro in their upcoming Euro 2020 qualifiers and Luke Shaw has become the fourth player to drop out of Gareth Southgate’s squad with injury, joining John Stones, Fabian Delph and Ruben Loftus-Cheek.

Shaw had a difficult weekend as Manchester United crashed out of the FA Cup, but he’s improved immensely this season, finally making that left-back role his own.

The Daily Mail reckon Shaw’s withdrawal means Leicester City’s Ben Chilwell will start the two games, though that’s not for us to worry about.

United haven’t got much cover at left-back and we don’t want to go back to the days of calling upon a makeshift option, like we do on the opposite flank most weeks.

April will be a challenging month for the Reds with the Champions League quarter-finals coming up, not forgetting our fight for a top four finish in the league.

There’s a lot of big games coming up and it would be a blow to be missing Shaw for any of those, so hopefully this is only a pre-caution or minor knock and he can get back on the pitch as soon as the international break concludes.