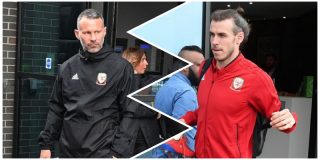 Manchester United legend Ryan Giggs returned to Carrington on Monday with the Wales national team set to train there ahead of their Euro 2020 qualifiers against Slovakia and Trinidad and Tobago.

One would imagine it wasn’t too difficult for Giggs to be granted permission by Ole Gunner Solskjaer or the club, considering his unbreakable ties with United where he spent his entire playing career and some time as a coach.

United would obviously like to see Giggsy succeed in management and maybe one day become manager at Old Trafford. It’s clearly his ambition as a manager one day to take over at Manchester United.

Real Madrid star and long-time United target Gareth Bale was with the Welsh squad at Carrington, which will undoubtedly spark a few headlines for the gossip columns.

It certainly looks like his future at the Bernabeu is under threat following the reappointment of Zinedine Zidane as manager.

Speaking to the media after his return to Carrington, Giggs said, as per BBC Sport: “I spoke to Ed and Ole was fine with it. I can understand a little the criticisms, but my job is to prepare the squad as best I can and, without a shadow of a doubt, this is the best way.”

Giggs makes a valid point, although I’m not sure what criticisms can be had for watching the best training environment for his players.

“I went to see Colliers Park last month and it is a great facility. But the pitches are not quite ready and our options were Liverpool, Everton and Manchester United.”

While it’s unclear Wales were offered to train at Liverpool or Everton, Giggs couldn’t have asked for a better outcome than to have his squad prepare for their upcoming qualifier against Slovakia, at Carrington.

The match against Trinidad and Tobago is a friendly.