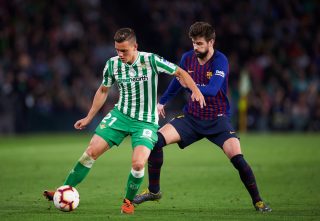 Gerard Pique will be looking forward to returning to Old Trafford in the Champions League after spending four years at Manchester United during the early stages of his professional career.

There’s a lot of talk about the La Liga giants the past two years not quite being at the same level we for so long expected of Barcelona. All good things must come to an end but the Catalan club remains successful, dominating the domestic side of football in Spain, and they could still finish this season with the treble.

“We’ve taken three very important points,” Pique told reporters after Barcelona’s 4-1 win over Real Betis, in which Lionel Messi scored a sublime hat-trick. “The gap between us and the others is very important, but there is still a lot of football to play. We are feeling good, but we must continue to approach things match by match.”

That’s pretty much what Ole Gunnar Solskjaer has done to this point, but he must get back to winning ways after suffering two consecutive defeats with Saturday’s 2-1 loss to Wolves seeing United out of the FA Cup.

NEXT: Man Utd linked with Argentine star Mauro Icardi, Inter will listen to offers of £68M

April is a big month for Ole and his United side, but as things stand we’re in for a top four finish and the Champions League quarter-finals. Every reason to be positive.

“It’s good that people are excited, but we have to keep our feet on the ground,” he added when asked about winning the Treble. “LaLiga Santander is moving closer. However, the Champions League has been difficult for us at the quarter-final stage.”

Barcelona have been spotted at the quarter-final stages regularly over the last five seasons and they’ll hope for a better outcome this year.