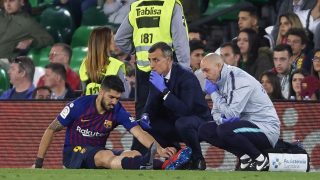 Luis Suarez was substituted in the final minutes of Barcelona’s 4-1 win against Real Betis on Sunday night and is now in line to undergo tests on a sprained ankle.

[BREAKING NEWS❗] @LuisSuarez9 has sprained his right ankle. Tests tomorrow will determine the exact extent of the injury #BetisBarça pic.twitter.com/oFc5BfYudM

On a night when Barcelona got closed to clinching the title, it was Lionel Messi that stole the show with a superb hat-trick but Suarez did add to his league tally (18) for the season. That’s not a bad record for a player many say is past it!

Suarez is due to join up with the Uruguay squad for their match against Uzbekistan, but Barcelona will wait on test results before allowing the player to depart.

NEXT: Man Utd should take up offer to sign Atletico Madrid man, Barcelona signal no interest

As underdogs in the Champions League tie, United will take any help they can get going into the both legs. If Suarez is unable to play we still have Messi to deal with… if they lost the Argentine, that would be an entirely different story.

Barca will play United at Old Trafford in the first leg on April 10, with the return fixture six days later at the Nou Camp. The winner will then meet either Liverpool or FC Porto in the semi-finals.

If fit for the game at Old Trafford, you can be sure Suarez will be in for a heated atmosphere.