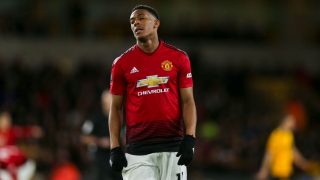 Anthony Martial has been withdrawn from the France squad after suffering a knee injury.

The forward felt discomfort in his right knee and had to be substituted on Saturday night during the 2-1 defeat to Wolves in the FA Cup.

This is the second consecutive international break Martial has missed through injury. The last, earlier on this season, saw him return to the French squad after being overlooked for their triumphant World Cup campaign, so you can be sure he’ll be kicking himself…

Martial will now miss his country’s European Championship qualifiers against Moldova and Iceland.

NEXT: Barcelona’s Luis Suarez to undergo tests on ankle, could miss first leg of Champions League tie vs Man Utd

Anthony Martial has had to withdraw from the France squad due to the reoccurrence of a knee issue. He felt pain in his right knee as #MUFC lost in the FA Cup last night & has been replaced by Thomas Lemar

With United now out of the FA Cup, it’s important we pick up momentum and hit the ground running when the international break ends. It’s the business part of the football season and United are still in with a chance for a top four finish after booking their place in the Champions League quarter-finals against Barcelona.

There are a number of injury concerns for United though.

Romelu Lukaku was ruled out with a foot problem for the defeat against Wolves and won’t play for Belgium in their upcoming fixtures. Hopefully neither injury suffered by Rom and Martial is serious and both will be in contention to face Barcelona in the first leg at Old Trafford.

Meanwhile, Alexis Sanchez could be in the treatment room for the rest of the season after damaging knee ligaments, meaning he may have played his final game for the club after turning out to be a flop signing.

Next up for United in the league is Watford and with Chelsea losing in the league to Everton on Sunday, we really ought to make up for lost ground. April is a busy month for the Reds!