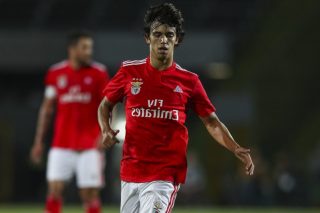 Benfica starlet Joao Felix has been asked about rumours that he could leave the Portuguese side this summer, amid links to Manchester United, but he insists that he is happy at Estadio da Luz.

Felix, 19, has played an integral role for Benfica this season, netting 12 times and assisting six in all competitions. His performances this season have reportedly attracting interest from Liverpool too, as reported by talkSPORT.

We can only assume Benfica will demand top money for Felix this summer, especially after the season he’s had, and there’s already talk Jadon Sancho is valued at £80 million (via The Independent) following his breakthrough season at Borussia Dortmund.

It’s a lot of money but if Ole Gunnar Solskjaer rates a young player and believes he can improve United, the club must ensure they go out to sign the best talents in football.

NEXT: Man Utd should take up offer to sign Atletico Madrid man, Barcelona signal no interest

Felix has played down a move to United but admits his dream has always been to play for the big teams and in the big competitions, and nobody needs convincing that Manchester United is the biggest club in the world.

“My dream has always been to play for the big teams and in the big competitions,” Felix said, as quoted by the Manchester Evening News.

“But I’m here and I’m very happy with Benfica, which, like those teams, is also a big one in Europe.”

Like his Benfica teammate, Ruben Dias, also linked with United (via The Sun), Felix is seen as the future of Portuguese football. That’s a huge responsibility to take from Cristiano Ronaldo, if he does go on and become a top player.

Felix is right to try brush aside speculation for now and to focus on finishing this campaign strongly.

His form this season warrants interest from the elite.