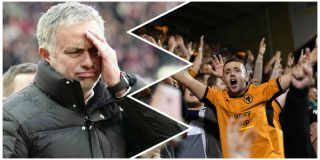 It’s been a poor game thus far with Manchester United lacking any real cutting edge in the final third.

While you get the feeling Wolves fans would prefer to be facing this United side managed by José Mourinho for obvious reasons, they made an attempt to take the p*ss out of our away support at Molineux.

Like water off a duck’s back, we’ll take their gesture with a pinch of salt knowing United have the best away following in the country.

He also took a swipe at their cringing pre-match light show.

‘Mourinho’s right, your fans are s***e’ is a first at a United away game. They’re not, but the away end doesn’t help generate an atmosphere. Nor does the cringing light show. Stodgy 20-odd minutes. #mufc haven’t probed enough.