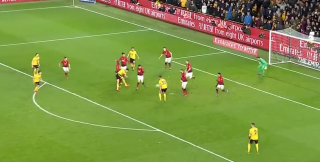 We’ve not been at the races today and it would be totally fair to say Wolves deserve to be ahead.

Jimenez has been a threat throughout the game forcing Sergio Romero to make some terrific saves, but the Argentine goalkeeper was unable to prevent his twist-and-turn effort as Manchester United defended appallingly.

Then the second goal came from a Wolves counter-attack. Jota made it two after turning Luke Shaw inside out as United’s last man back.

Wolves look very comfortable at the moment but United haven’t created any real chances to unnerve them.

It looks like a shock result with United crashing out of the FA Cup.