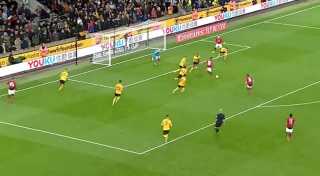 Too little too late, in the last minute of stoppage time.

Marcus Rashford score a consolation goal against Wolves in the FA Cup quarter-final as Manchester United crashed out of the tournament following a 2-1 defeat.

A brilliant display by the home side to knock United out but to say we’re gutted with the result and performance would be just about right!

United are out of the only cup we had a realistic chance of winning. They looked shattered and failed to offer anything until the end, when Rashford added to his tally for the season.

NEXT: (Watch) Woeful defending at fault as Wolves look set to knock Man Utd out of FA Cup

The goal shows Luke Shaw is taking advice from Solskjaer about getting forward, which the boss has said he wants to see more of.

We need to bounce back with a winning run now to ensure our season doing go back to the gutter, and with Ole Gunnar Solskjaer we trust that is what will happen.