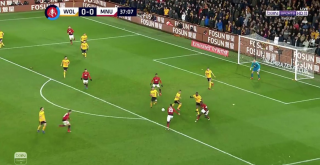 A difficult penalty decision to call even after replays!

But it’s arguably more of a pen than the one we were awarded against Paris Saint-Germain in the Champions League.

Funnily enough, it involves Diogo Dalot striking the ball off a member of the opposition, just like the incident in Paris.

The Wolves defender turns to his side and has his arms stretched out, but the ball does appear to be blocked by his arm so it should have stood as a penalty.

United players weren’t happy with the referee’s decision not to give the decision and the scoreline remains 0-0, but we need to test Wolves goalkeeper John Ruddy more…

Watch the video below and tell us if you think it was a penalty.