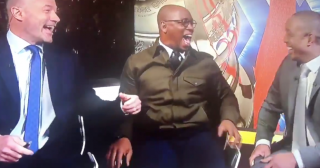 Ex-Manchester United midfielder Paul Ince took a lot of heat from fans last month after claiming he could have had the same success as caretaker manager Ole Gunnar Solskjaer.

Gary Lineker has referred to the controversial comments made by Ince causing hysterics in the BBC Sport studio from legends Alan Shearer and Ian Wright ahead of United’s cup tie away to Wolves.

Ince took Lineker’s reference well, but may now be wary of making such bold statements again!

“I could’ve gone in and righted the ship, (Steve) Bruce and Sparky (Mark Hughes),” Ince had claimed on BT Sport.

United are currently level with Wolves in the FA Cup quarter-final at Molineux.

Check out Ince’s initial comments below.

'I could've gone in and righted the ship, Bruce and Hughes too..'

Paul Ince backs himself to have had the same success as Ole Gunnar Solskjaer. 🔴

Stephen Warnock isn't so sure.. 🤔#SaturdaySav pic.twitter.com/axww5rRLYY biggest back track in tv history from @stephenwarnock3