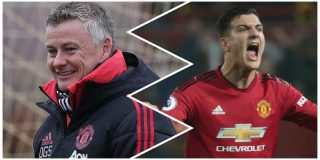 We could see a tactical tweak when Manchester United line-up to face Wolves in the FA Cup quarter-final.

Ole Gunnar Solskjaer doesn’t have Ashley Young for the tie because he’s suspended after being handed two yellow cards in the competition this season. That warrants a one-match suspension, so the England international will hope there’s an FA Cup semi-final to play when he returns.

The Norwegian spoke to the press on Friday, as quoted by the Manchester Evening News: “Ashley’s been fantastic. But we’ve got Diogo, Phil Jones can play there [at right-back], so we’ve got players who could play there. We might even swap to a different system, you never know.”

One aspect of Solskjaer’s management I really enjoy is how he’s constantly proactive. The system could change 2 or 3 times throughout the game always in attempt to tilt it United’s way.

Solskjaer knows what it takes to win trophies as a player, now he aims to do it as a manager.

“To win trophies you’ve got to win at least one or two really tough games,” he added. “They’re like defining moments. We beat Liverpool, we beat Chelsea, we beat Arsenal back then [in 1999], and you think, ‘We deserve a little bit of luck in the draw next time.’

“But Wolves away, what a difficult game that can be. So comparisons? Well we’re not challenging to win the league this year but we are challenging for the other two trophies.”

The other being the Champions League…

While that speaks too big of an ask, we overcame Paris Saint-Germain in extremely difficult circumstances. We must believe heading into the two games against Barcelona. Otherwise it’s pointless.

However, United could definitely lift the FA Cup this season and we’ve already knocked out some of the biggest teams, with away wins over Arsenal, Spurs and Chelsea.

Ole knows what he’s doing and we are intrigued to see how United set up against Wolves later on.