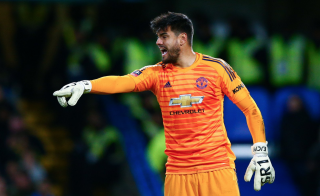 Wolves sealed their spot in the FA Cup semi-finals with a 2-1 win over a strangely lacklustre Manchester United side at an atmospheric Molineux.

It was a difficult night in which every United player looked well short of their best. Well done to Wolves and good luck in the semis.

Here are our player ratings from the quarter final.

Made three huge saves to keep out Ruben Neves, Wily Bolly and Joao Moutinho. On a night when hardly any United players did themselves justice, Romero underlined his status as surely the best number two keeper in the land. Nothing he could do about the Raul Jimenez turn and finish that finally beat him and was powerless to prevent Jota’s second.

Came in for the suspended Ashley Young and was steady. Didn’t do anything wrong but perhaps didn’t bomb forward as much as we’re accustomed to seeing. Kept in check by Wolves explosive full-backs. A flurry of poor corners epitomised a bad night at the office.

On a tough night at the hands of a Wolves team with a nasty bite, Smalling was dealt a tough hand by the pace, trickery and power of Raul Jimenez. Could hardly be held accountable for two quick-fire blows that deal the Reds a KO blow, but looked shaky at times.

I thought Lindelof did quite well. He was very harshly shown a late red card which was eventually over-ruled by VAR and downgraded to a booking. Got some good blocks in, looked composed and deal with a lot confidently. Cannot be blamed for either goal.

Nearly every attack United put together came down his side, he started quite well but was often guilty of overplaying, his decision making was poor and he got beaten too easily by Diogo Jota for the second goal. Set up United’s very late consolation with a decent run.

His performance epitomised that of the team – slow, cumbersome and out of sorts. Back from injury but looked like the liability he resembled earlier in the season. Hooked for Juan Mata late on and was fortunate to survive that long.

Pogba tried to take on Wolves by himself at times, losing the ball constantly and didn’t work hard enough. To Wolves credit, he was marshalled superbly by his opposite number Leander Dendoncker. A night to forget

Rash and ragged on his return from injury. Tried hard but was booked and it was no surprise to see him taken off. Offered little. Anonymous and poles apart from the totemic bundle of energy and guile he has been at times this season.

Another player just coming back from injury. Was he fully fit? Quiet and on the periphery, his usual menace, movement and link up play was conspicuous by its absence.

Rashford has not been right since playing through injury against Liverpool. You wonder if that has done him more harm than good. Good finish very late on for the smallest of consolations but otherwise he was quiet.

Barely threatened, you’d be forgiven for thinking he wasn’t even playing. This was the XI that has worked so well for Ole’s United so far, but it never got going and looked absolutely shattered. Martial got little if any change out of Wolves excellent full-back Matt Doherty. He was doubled up on and very much struggled. Again, how fit was he.

Offered some energy and had a few sighters from range but came off the bench into a firestorm. Replaced his rhyming colleague to try and rescue the game.

Came on late. No rating