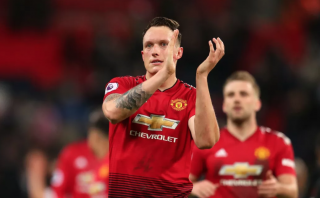 Phil Jones gets his share of criticism but the Manchester United defender copes well enough to enjoy himself.

Any conversation referencing Jones on social media tends to be fully loaded with memes, funny faces, own goals and injuries, but he gets on with it and is happy about how his career has planned out thus far.

He has currently been out of the team due to illness, but could return as early as today in the FA Cup quarter-final against Wolves.

Speaking to Goal reporter Sam Lee, Jones said: “Ever since I was at Blackburn, when you talk about getting pro contracts I was never the guy that was talked about as, ‘This guy is going to be the best player, the next best thing’. I was always the guy who just managed to get one and went under the radar a bit, and the next minute I was playing in the first team and the lads tipped to be the next best thing are working in an office.”

Jones is not oblivious to the stick he gets on social media and puts his ability to cope with it all down to being strong mentally.

“I’m lucky enough that I am strong mentally,” the England international added. “I know a lot of players will come out and say in the press that it doesn’t bother them and then two minutes later they’ll be on the Daily Mail on their phones, but it genuinely doesn’t bother me.

“I have a wonderful family, wonderful friends and I have a little girl now and I don’t care what people say. People can make their own opinions up, ultimately I’ve got another contract at United, I’ve been here for eight or nine years now and I’ve won the Premier League, been to two World Cups, been to a Euros, played in the Champions League, won the Europa League, the FA Cup, so people can talk but ultimately they’re the stats and that’s what I’ve done.”

Jones is right to come out and defend himself, but the best way to do that is on the pitch.

He could become an important backup option at United, if he’s happy to play such a role in the squad but if we’re aiming for league titles we need better centre-backs than Jones.

Jones joked about a potential testimonial which he seems reluctant about, saying: “I wouldn’t go that far, there’d be only my mum and dad who would turn up.”