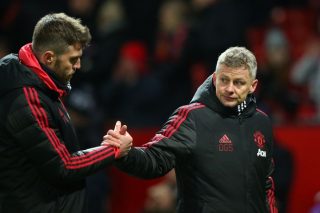 Michael Carrick has opened up on the impact Ole Gunnar Solskjaer has had at Manchester United as caretaker manager, and says Sir Alex Ferguson’s influence on the Norwegian’s managerial style is clear.

United’s record under Solskjaer is beyond impressive. We’ve only lost twice since mid-December and overturned a two-goal deficit in the second leg away to Paris Saint-Germain in the Champions League to knock the French champions out.

Every man and his dog knows the club will appoint Solskjaer on a permanent basis, and Carrick is one of many calling for that decision to be made.

In an interview with ESPN, Carrick said: “It’s gone as well as anyone could have hoped for.

“The start we had at Cardiff was essential and then to go to Tottenham and win was massive. It’s just snowballed from there.”

The former United midfielder jokingly added: “He’ll have to stay because I need to keep my job! I don’t think you’ll get many Manchester United fans or players who will say otherwise to be honest.”

To be honest, I don’t think you’ll find many Reds wanting any of the current managerial staff to change, including Carrick and Kieran McKenna. They’re all part of this amazing turn around and Mike Phelan is having an undoubtedly massive role in all of this.

Phelan, who played under and worked alongside Sir Alex Ferguson, would have noticed the similarities in Solskjaer’s management by now.

“He [Solskjaer] is his own man.

“The boss [Sir Alex] is a massive influence on him, like he is with me. You’re influenced hugely over the years so there are strong similarities but he is his own man and he sees his own things. I wouldn’t want to be unfair on Ole.

“The boss is the boss, we all know that and in some ways he still is the boss but I think Ole has got to take an awful lot of credit for the position he’s in.”

Totally agree with Carrick here, but having such a figure come out clearly stating he wants Solskjaer to get the job after having such a positive impact will go a long way towards Ole landing the job.

The club isn’t under pressure by any means, but there’s a lot of encouragement from the stands and media to announce Ole as manager before the season ends.

If they set out to make an official announcement in the summer, why not follow through with that plan? You, I, and your mate’s dog know Ole will be our manager next season. It’s as certain as Liverpool getting an easy draw in the Champions League. Oh wait…