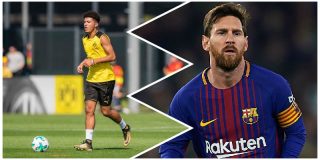 Jadon Sancho is having an incredible breakthrough season at Borussia Dortmund.

While German football takes a hammering because no Bundesliga side made it through to the Champions League quarter-finals, on the back of a poor World Cup campaign in Russia, it would be unfair to take anything away from Sancho’s rise to prominence.

Sancho didn’t have an easy route to first team football. He felt at Manchester City opportunities would come seldom and took a risk by moving abroad to Germany. It paid off and the England national side will hope to take advantage of having one of Europe’s most exciting youngsters.

He’s just 18 and has racked up an impressive 12 assists for Dortmund this season – two coming today in their dramatic 3-2 win over Hertha Berlin. That’s the same amount as Lionel Messi, with the pair leading in the assist charts throughout Europe’s top five leagues.

The test for Sancho comes next season and beyond to see whether he is able to provide assists consistently each season. That’s what great players such as Messi do.

Jadon Sancho is proving to be the key man in Borussia Dortmund’s bid for the Bundesliga title.

The teenager moves level with Lionel Messi on 12 assists for the season – the joint lead in Europe’s top five leagues – with another two today. pic.twitter.com/8V5jBwrKxF

It comes as no surprise to see United heavily linked with Sancho when you read these statistics. We need a specialist wide player for the right and it looks like he’s our prime target this summer, as reported by The Independent.

We’ll be hoping Messi doesn’t contribute with any assists when United take on Barcelona in the Champions League quarter-finals.