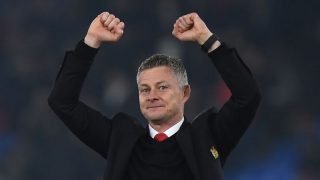 Ole Gunnar Solskjaer has proved so many people wrong since becoming caretaker manager.

He was only given the Manchester United hot seat until the end of the season, but now fans want the Norwegian to be handed the job on a full-time basis.

Bizarrely, some still claim Solskjaer has been beamed at by luck, while others like James Ducker of The Telegraph look at facts.

In a post on Twitter, Ducker notes that Solskjaer has had terrible luck with injuries and difficult away draws in cup competitions.

I do chuckle when people say Solskjaer has been lucky. He’s had terrible injuries, Arsenal, Chelsea and Wolves away in successive FA Cup draws & Barca now following PSG in the CL with Liverpool (or Porto) potentially in the last four. Not sure that counts as living a charmed life

To add to that, United will be without Alexis Sanchez and Romelu Lukaku when taking on Wolves in the FA Cup quarter-final – another draw away from home in the cup – while Mason Greenwood missed a lot of training during the week due to illness.

There are probably still people in disbelief but Solskjaer has passed the honeymoon period. It’s clear now after watching some of the big games that he’s clued in when it comes to tactics, and it’s great to see a manager who is proactive on the touchline.